The Southeast Produce Council will honor Paul J. DiMare Sr. with its 2013 Lifetime Achievement Award during the council’s annual convention and trade show later this winter in Florida.

The convention, known as Southern Exposure, will take place from Feb. 28 to March 2 at the Caribe Royale Resort & Conference Center in Orlando, FL. This will be the 10th convention and trade show for the council, which was formed in 1999 and which has grown steadily ever since.

Paul J. DiMare Sr.Mr. DiMare will receive the award, sponsored by the council and The Produce News, on Saturday, March 2, during the keynote luncheon. 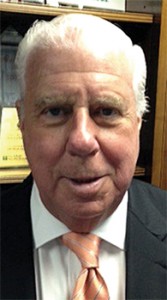 Mr. DiMare joins a distinguished group of industry leaders to be honored with the Southeast Produce Council’s Lifetime Achievement Award. Joe McGee of L&M Cos. was the first to receive the award in 2008, followed by Ferdinand Duda of A. Duda & Sons in 2009; Peter Pero of Pero Family Farms in 2010; Tommy Irvin, Georgia’s former commissioner of agriculture, in 2011; and Reggie Griffin of The Kroger Co. in 2012.

But asked how he felt when SPC Executive Director Terry Vorhees notified him that he was chosen to receive the council’s 2013 Lifetime Achievement Award, Mr. DiMare said, “I was humbled. It’s quite an honor. Anytime your peers honor someone, it’s a great achievement.”

He added, “This is a very important honor. This one is right at the top.”

As the company’s website states, “The history of the DiMare companies began with a pushcart filled with produce on the streets of Boston more than 80 years ago.”

Paul J. DiMare Sr. was born April 14, 1941, in nearby Cambridge, MA. He attended Georgetown University in Washington, DC, in 1958-59, but left to join the family business.

“The business has changed tremendously,” Mr. DiMare told The Produce News Jan. 3. There are a number of challenges, both current and on the horizon, which give him pause. He mentioned governmental regulations, the always-unpredictable weather, and relationships between buyers and growers as a few examples of those challenges.

And he put the longstanding problem of immigration reform right at the top of the challenges facing agriculture. As he put it succinctly, “It’s the number one issue for the farmers.”

Yet despite those challenges, or perhaps because of them, he still finds the produce industry exciting.

As Faye Westfall, director of sales at DiMare Fresh in Tampa, FL, put it, “He’s very passionate about the business.”

Ms. Westfall, who has known Mr. DiMare since the late 1960s, was “elated” when she was notified of Mr. DiMare’s upcoming honor.

“He is so deserving of this honor,” she said enthusiastically. “He has been in the forefront of some very important issues. He’s a pioneer in the industry and he deserves these accolades.”

Mr. DiMare and his wife, Swanee, live in Coral Gables, FL, and have five children. They were married in 1989 on April 14 — Mr. DiMare’s birthday.