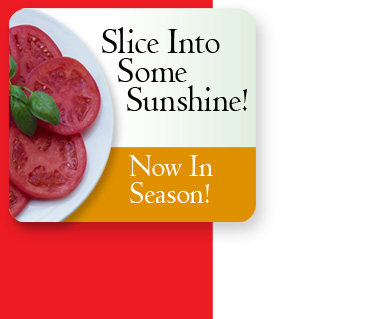 The remarkable tomato nutrition story is full of technical terms. Refer to the accompanying glossary for an explanation of terms that may be unfamiliar.

Throughout the 1980’s and early 90’s, most of the attention concerning carotenoids centered around beta-carotene. The results were promising at first, but gradually it became clear that with the more than 500 carotenoids found in plants, the picture was much more complex. Just as the role of beta-carotene in cancer fighting was called into serious question; the carotenoid lycopene became the rising star. Lycopene, one of nature’s most powerful antioxidants, is found almost exclusively in tomatoes. Following is a summary of the promising lycopene research conducted during the past few years.

Lycopene entered the spotlight in 1995 with published studies from Harvard University identifying a positive association between intake of tomatoes and tomato-based foods and diminished risk of prostate cancer in a group of 48,000 health professionals followed over a six-year period. Furthermore, they found that other dietary antioxidants, including beta-carotene , were unrelated to prostate cancer risk reduction. In a similar observational study in Italy, where tomatoes are a mainstay of the diet, it was found that tomatoes had been consumed in significantly lower quantities by a group of subjects suffering from colorectal and other digestive tract cancers than by the healthy control group.

In a study conducted by University of North Carolina scientists, the fat samples drawn from both heart attack sufferers and healthy controls were analyzed for lycopene and other carotenoids . They found significantly more lycopene in the fat of the controls than the heart patients. Not surprisingly, the diet of the control group was also higher in tomato products leading the researchers to conclude that a lycopene-rich diet may have protected them against heart disease. A second study is underway on lycopene and lung tissue.

The method of preparing tomatoes seems to have an affect on lycopene absorption. In a study in Dusseldorf, Germany, researchers found that the lycopene blood levels were higher in subjects after ingestion of a heat-processed tomato product than when uncooked tomatoes were consumed. Apparently the heat disrupts the cell structure of the tomato, making lycopene more readily available. Adding a small amount of fat during the preparation of a tomato dish seems also to be beneficial. The fat “dissolves” lycopene, allowing more of it to be absorbed into the bloodstream.

At a recent symposium on lycopene in New York City, several speakers cautioned against extracting lycopene or any other compound from tomatoes and administering it separately to obtain the benefits. Tomatoes are also a source of vitamins, mineral, carotenoids, and other phytochemicals that are most likely working together.